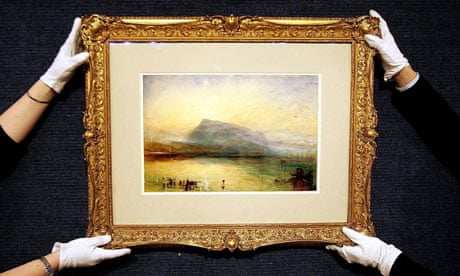 If we share some of Turner’s work, we could create a world-beating collection of 20th-century art.

JMW Turner bequeathed 300 of his masterpieces to the nation, alongside 30,000 of his watercolours, drawings and sketches. Clearly, only a small proportion of his work can be installed in its home at the Tate, and so most of it is never seen by the public, but safely stored away in silent darkness.

I wonder how Turner would feel now, in an age of mass travel and mass communication, to have his work squirreled away, inaccessible to anyone but scholars.

If we were able to ask Turner if he would prefer to have, say, 25,000 of the watercolours and drawings spread around the world’s great museums, with large archive centres in Paris, New York, Washington, Berlin, Rome, and the major museums in China, India, Brazil, Australia, South Africa, Russia – don’t you think he would prefer it?

Perhaps even 50 or so of his great paintings shared out for each museum to display in their own collection?

I don’t know any artist who wouldn’t prefer to have his work visible, and available around the globe; a dozen archives in the world’s leading museums for students, critics, writers, anyone, able to study his work, rather than in one largely invisible one.

How would Turner feel if we parted with some of those 30,000 works to be apportioned among the world’s great institutions, enabling us to build a war chest to strengthen the nation’s core collection of art of the past 100 years?

Turner was well-known for supporting younger artists, hence his choice as the bearer of the Turner prize gong. He left a financial legacy which he hoped would be used to support less fortunate artists, planning and designing an almshouse for them in Twickenham. And before the great and the good of the art world throw up their hands in horror at the mere suggestion of dispersing his legacy, the Charity Commission decreed in 1995 that the Turner bequest was free of Turner’s conditions, and there was no obligation to keep them together.

That being the case, why not examine the advantage of sharing some of his great achievement – therefore helping fulfil Turner’s true intention of having his works always available to be seen (admittedly not in the Turner Museum he was promised at the time – a promise the government reneged on 22 years after his death), but nonetheless widely visible, rather than hidden from view; the Turners you own, but can’t see.

I think he would also share my view that the job of a museum of modern art is to ensure that in decades, even centuries to come, the key works that represent important developments in art are available to be examined by future visitors.

This is hard to pull off with a measly acquisitions budget, and it would have always been wrong for the state to buy very new art cheaply before the artist has proven his worth.

That means you have to build the national collection around art that is by definition validated – and more expensive.

But our own little Occam’s Razor leaves us with an inadequate national collection of our great artists – not enough prime Hockney, Freud, Bacon, Auerbach, not a good collection of British Kitchen Sink painters, or British Pop Art pioneers, like Hamilton, and a weak group of works by the YBA generation.

It is a duty of care for museum managers to ensure that in their term of office they are adequately providing future generations of Britons with the ability to see our own outstanding artists well-represented.

With the kind of money raised by spreading our Turners around, we are still left not only with the premier collection of Turner that his bequest provided – it could allow Britain to have a collection of 20th-century art to rival that of MoMA, in New York.

Turners could also be traded with other museums for their own masterpieces by artists they themselves hold in some depth; they could manage to give up one or two in order to achieve the holy grail of a powerful Turner collection of their own that they would be able to display.

Even a staunch admirer of Turner, the redoubtable art critic Brian Sewell wrote at the time the Tate was mounting its campaign to save The Blue Rigi painting from being sold abroad: “This is just bloody silly. We have 20,000 Turners in this country and we do not need to spend £5m to keep The Blue Rigi or indeed any of the Rigis.”

I think that JMW would be keen to see his bequest gathering a worldwide audience instead of gathering dust; kept together not in a storage facility, but across our world’s greatest museums.

As an artist who travelled widely himself to paint, he would probably hope that in this day of global fluidity, his work could be accessible to as many people as possible, everywhere.

He would also have been proud that he alone had made it possible for his homeland to have the spectacularly good national collection of the world’s modern masterpieces it deserves.