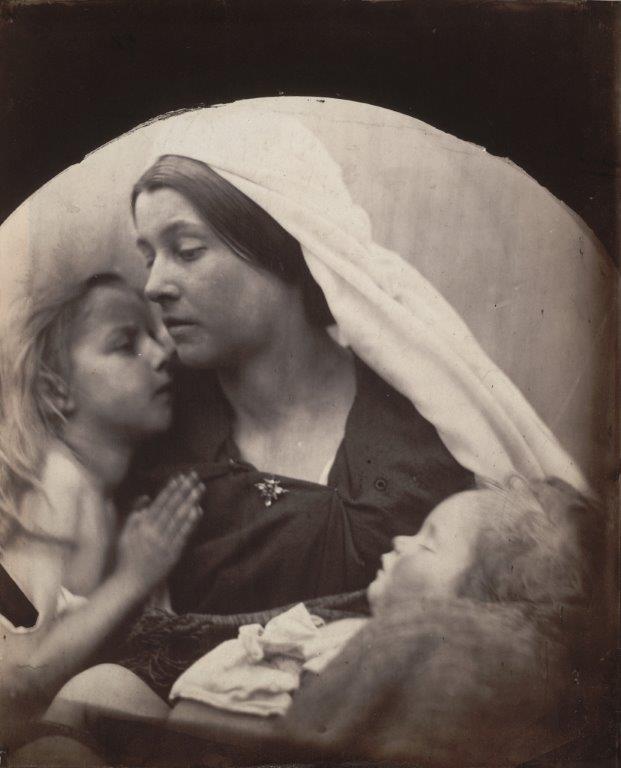 Julia Margaret Cameron (1815-1879) was one of the first photography pioneers, but her great skills are often overlooked. She only took up the medium at the age of 48, but was quick to break with all photographic conventions of the time. Ignoring the rigid Victorian constraints, her conviction led her to develop a unique style, igniting a trail for photographers to come.

When Cameron was gifted her first camera while living in the family home on the Isle of Wight, her grown-up married daughter told her: “It may amuse you, Mother, to try to photograph your solitude here at Freshwater”. A parent of six and deeply religious, Cameron was famously eccentric even amongst her distinguished, bohemian friends. Her circle included some of Britain’s finest minds, including Charles Darwin, the painter GF. Watts, and poets Robert Browning, Henry Taylor and Alfred Lord Tennyson.

Cameron also created a landmark with her fascination with the notion of celebrity, and in many cases the portraits she took of her well-known friends are the only photographs of them known to exist. The camera became her link to the writers, artists, scientists, friends and neighbours when her husband was in Ceylon visiting his coffee plantations. Her children having grown up and left home, she had time to train herself to master photographic techniques.

As she wrote: “I began with no knowledge. I did not know where to place my dark box, how to focus my sitter, and my first picture I effaced to my consternation by rubbing my hand over the filmy side of the glass.”

Nevertheless she persisted, and learnt how to create albumen-silver prints on wet collodion glass plate negatives. Although she was using the equipment as a beginner – who was immediately attempting to create art – she saw herself as a professional from the very beginning.

She set about copyrighting, publishing and marketing her photographs so vigorously that within eighteen months, she had not only sold eighty prints to the Victoria and Albert Museum, but also established a studio within it, and organised a dealer to distribute her pictures.

Though it appears that she was a formidable force as a businesswoman, Cameron’s passion was to be recognised as an artist. She never accepted commissioned portraits, enlisting the people closest to her to sit, often dressing them up as if in a production, and hoping to embody their virtues.

She certainly never saw eye-to-eye with the gentlemen considered professional photographers at the time, and they were less than impressed with her technically imperfect images; they simply considered her work full of slovenly mistakes. As a prominent critic at the time remarked, “I hope she has the hide of a rhinoceros, for never has any photographer been subjected to greater criticism than this lady”.

Rather, she found supporters amongst the pre-Raphaelite artists, who admired her soft focus and minimal backdrops. Where professionals saw imperfections – smudges, discoloured patches and other chemical glitches – they saw appealing idiosyncrasies.

Born in Calcutta to a senior British official, she married a man 20 years her senior and promptly had five children, adopted one, and also brought up another five young relations. With so many people to look after, it is little wonder that she only managed to get started in photography at such a late age.

The relationship between children and their parents was clearly of fundamental importance to Cameron, as many of her images featured women in idealised scenes of motherhood, such as in ‘Madonna with Children’seen here. In this photograph, Cameron transformed a local dressmaker, Mary Kellaway, and the children of a gunner in the Royal Army, into the figures of an enduring art historical scene. The dressmaker clearly evokes the ideals of the Virgin Mary, and her white headscarf seems to suggest a glowing halo.

Cameron often favoured dressing her subjects in dark clothes against a plain background, giving her images a timeless feel. In a radical step at the time, she manipulated the negatives, and would blur her lens in order to mimic painterly qualities. Titles such as Spring, Light and Love indicated that she intended her pictures to have the same allegorical effect as pre-Raphaelite paintings.

To some viewers however, the connection remained unclear. It was these quirks that made Cameron so easy to dismiss as an important photographer at the time – in addition to being a woman. But her ambition was unwavering.

She also had a reputation for being somewhat daunting, even described as a bit of a bully when it came to her sitters. The illustrious poet Robert Browning was once discovered motionless, and too terrified to move, after she had left him mid-shoot to prepare a photographic plate, and forgotten about him.

However, her neighbours on the Isle of Wight described how she could be charmingly persuasive as she waylaid famous visitors to the island, or other arrivals with interesting faces, talking them into posing for her.

In reality, Cameron was a dynamic force of nature, fearless in her demands on herself, stalwart in her aim to break out of the staid, corseted era that could have defined her work.

As her favourite museum the Victoria & Albert, put it: “Her innovative and unconventional approach created images that transcended the purely descriptive function of photography.” Of course, it was to be the V&A that gave Cameron the only exhibition she ever had in her lifetime.