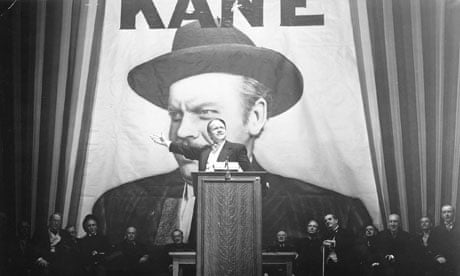 Hollywood’s treatment of Citizen Kane’s maker is no surprise from an industry that gives Oscars to so many dud films.

How do you handle failure? I handle failure very badly. Bitterly. Indignantly. Girly tears. I once saw a three-hour BBC interview with Orson Welles, and if it is possible to fall for a man just from seeing him on the telly, Mr Welles has had me as his love slave since.

Welles had manifold reasons to be bitter about life’s setbacks, not the least being that his unquestioned prowess as a film-maker didn’t stop Hollywood treating him like a disease. After years of having to panhandle for backing to fund his film projects – all unwanted by the studios, all later to be recognised as exquisite jewels – he eventually had to rely on appearing in TV commercials, endorsing wines or Spanish sherry, to finance his final movies.

Throughout the interview Welles was witty, fascinating, self-deprecating, animated, radiant, sparkling. Without a sullen or bitter bone in his immense body, he was a twinkly-eyed, beguilingly charming giant, not even fractionally undone by the burden of many setbacks and humiliations. The movie business is more than capable of driving anyone quite insane – the more insane, the more strangely gifted you may be. The story of Orson Welles illustrates vividly that it requires a resolutely secure person to take failure gracefully. Not a hope for most of us, and certainly not me.

A quick glance at the history of Oscar winners and nominations throws up many outstanding films that were passed over as Oscar finalists, with more mundane products regularly picking up the plaudits. Since 1950, none of the following movies have even been nominated for best film: North by Northwest; Some Like It Hot; Vertigo; The Searchers; When Harry Met Sally; Blade Runner; Cool Hand Luke; 2001: A Space Odyssey; Groundhog Day; Close Encounters of the Third Kind.

Of course, you may not agree that some of these films are particularly distinguished. Nonetheless, a list of the films nominated for Oscars over the past 60 years would make the most stoic of people weep. Mr Welles was beaten to an Oscar for Citizen Kane in 1942 by How Green Was My Valley. But it would be cruel punishment indeed to the Oscar ceremony, which gives us such queasy delight each year, to dwell on the number of times a certifiable dud like The Greatest Show on Earth beat a masterpiece like High Noon to best picture.

Sadly, in the movies as in life, being the best you can be isn’t necessarily a winning formula. Years ago, we bought a large US research company, whose specialist area was working for seven of the eight big Hollywood studios, pre-testing their films. The gentleman running this business was considered an all-powerful guru among the movie community, and his company would screen your movie at a preview stage, and have the audience score it before leaving the theatre. They would tick: a) enjoyed thoroughly; b) quite entertained; c) rather bored, etc; and also a) would see again; b) would recommend; c) would advise against, etc.

They would get ratings for each actor, and often try out different endings, to see which performances could be cut, and which finale worked more favourably. The studios could then determine which movies would be worth supporting heavily with a big marketing budget, and which to quietly give up on.

I thought that it would be illuminating to meet our guru running this company, and find out a little about how all the testing works. The thrust of my question to him was: if all of the studios produce 20 movies a year, but only three of them make substantial profits, five of them do OK, and the others are financial flops, what useful guidelines did his research provide? Three out of 20 hits didn’t appear to be a glittering track record for the benefits of pre-testing.

He explained one thing very clearly. “Each multiplex has screens allocated to each studio. The screens need filling. Studios have to create product to fill their screen, and the amount of good product is limited. So you have to go on creating films even if there is only mild enthusiasm for the project, in order to protect your multiplex screen allocation moving over to a competitor studio.”

It would be indiscreet for me to pass on other revelations he gave me about the dismal strike rate that Hollywood achieves. But at least I now knew the answer to a question that had often puzzled me – how did that film ever get made?