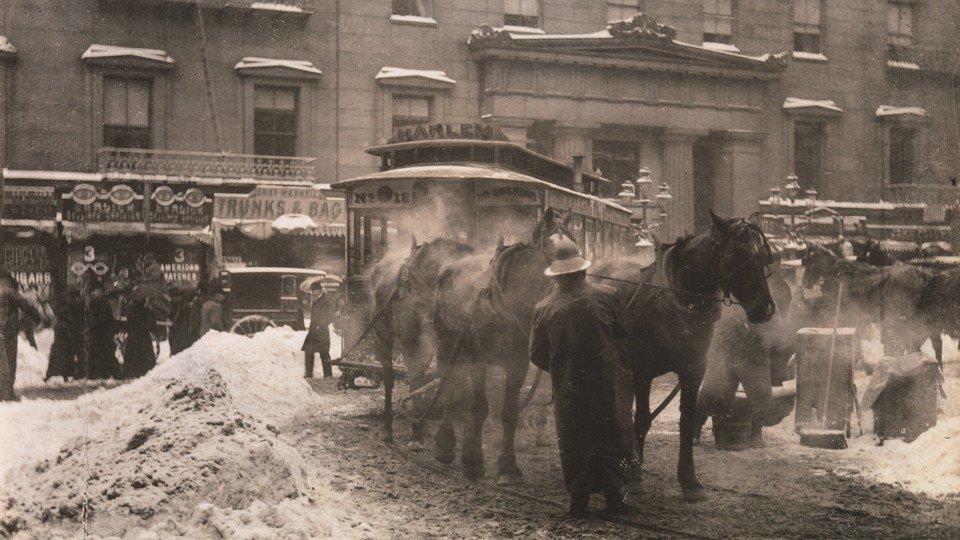 Alfred Stieglitz (1864-1946) was a pioneering titan of photography in early 20th century America, spearheading a movement that revolutionised the medium.

He founded Photo-Secession, a society to champion its new stature, but Stieglitz was also influential as an art dealer, exhibition organiser, publisher and editor.

He ran a number of galleries which were to play a part in implementing change, by demonstrating his belief that photography deserved to be considered an equal to other forms of fine art. Stieglitz would exhibit photographs alongside radical European modernist painters and sculptors, who were being seen for the first time in America. These shows created a powerful impact on a number of artists, one of whom was the brilliant Georgia O’Keefe, who was later to become his wife.

In comparison to many of his contemporaries, Stieglitz had a relatively uneventful upbringing. He was born in New Jersey, but his immigrant parents decided to move back to their birthplace in Germany in the hope of providing better education for Alfred and his five siblings.

While studying to be a mechanical engineer, Stieglitz enrolled in a science class which included the chemical process of developing photographs. He was transfixed.

Acquiring his first camera, he began experimenting with landscape subjects. As he became increasingly fascinated by his hobby, Stieglitz taught himself new techniques, and began to research and theorise, writing articles for Amateur Photographer magazine.

He slowly built a respected position in Europe, as he began to win prizes for his work. In 1890 he made his return to America, the beginning of his abiding battle to enhance the perception of photography. Soon, with generous help from his father, he established the Photochrome Engraving Company. But as a result of his insistence on only the finest quality processing, and the high wages he paid his employees, he rarely made a profit.

Stieglitz became co-editor of The American Amateur Photographer, and was to become somewhat renowned as an authority in the photographic world, which of course was still a relatively niche art form. Although he certainly considered himself to be an artist, he refused to sell his photographs.

Recognising the need to give the Photo-Secession movement a voice, Stieglitz launched a new magazine, Camera Work, concentrating on the technical skill and creative possibilities of photography, rather than just the images being currently produced.

When he opened an exhibition space with another early master Edward Steichen, the Little Galleries of the Photo-Secession, the two photographers were breaking new ground. Now photography could be displayed with the same reverence that had previously been the reserve of painting. It soon became a place for the photographic avant-garde to have their endeavours hang alongside accepted greats such as Picasso, Matisse and Cézanne, obviously seen as something of a triumph.

Stieglitz had clearly created a successful enterprise, and went on to open two more centres – the Intimate Gallery and An American Place following in the footstep of Little Galleries. Alongside the advances that he was making in raising the status of photography, Stieglitz continued to produce his own startling images. Few encapsulated the aims of the Photo-Secessionists as perfectly as ‘The Terminal’, taken in 1893. The picture has none of the wooden stiffness associated with vintage photography.

The picture manages to highlight the hot steam rising from horses standing outside a station building during an icy winter day. This work was crucial to Stieglitz, aiming to demonstrate that skilful photography could provide the lush atmospheric effects and sensuousness that viewers appreciated in masterful painting.

Taken using the first handheld camera, a Folmer and Schwing with 4×5 plate film, it allowed Stieglitz greater mobility – he could now shoot scenes more spontaneously, and capture fleeting moments. In a sense, he was the original street photographer, no longer satisfied with the formal, stiff nature we see in vintage photographs of the time.

For his picture ‘Winter, Fifth Avenue’ taken in 1892, Stieglitz patiently waited in a snowstorm for three hours, thoroughly frozen as he searched for the perfect moment.

Looking for an ideal composition, he used paths in the snow to lead the eye to a focal point –  the dark horse and carriage engulfed in the atmosphere, giving

the photograph its Impressionist feel. It was no accident that the coach driver is depicted braving the elements, redolent of 19th century Romantic painting.

In ‘The Steerage’ from 1907 he captured crowds of people boarding a crammed steamship, with herded third class passengers being watched by more comfortable ladies and gentlemen on the first class deck above. Although clearly sympathetic, the picture was more a study in line and form than a social statement.

Steiglitz described it as his first purely ‘modernist’ creation, and it was soon to be seen as setting a benchmark. He had demonstrated how a fairly mundane subject could be treated as a fractured collage of linear imagery, to striking effect.

It was clear from works such as these that photography was capable of majestic heights in the hands of talents as remarkable as Stieglitz. He was certainly the most vital force in assuring its full acceptance as pure art.

As he explained ‘My prints show the world’s constant upsetting of man’s equilibrium, and his eternal battle to re-establish it.’ Stieglitz was always clear about the guiding principle he strove to uphold. “In photography there is a reality so subtle, that it becomes more real than reality.”