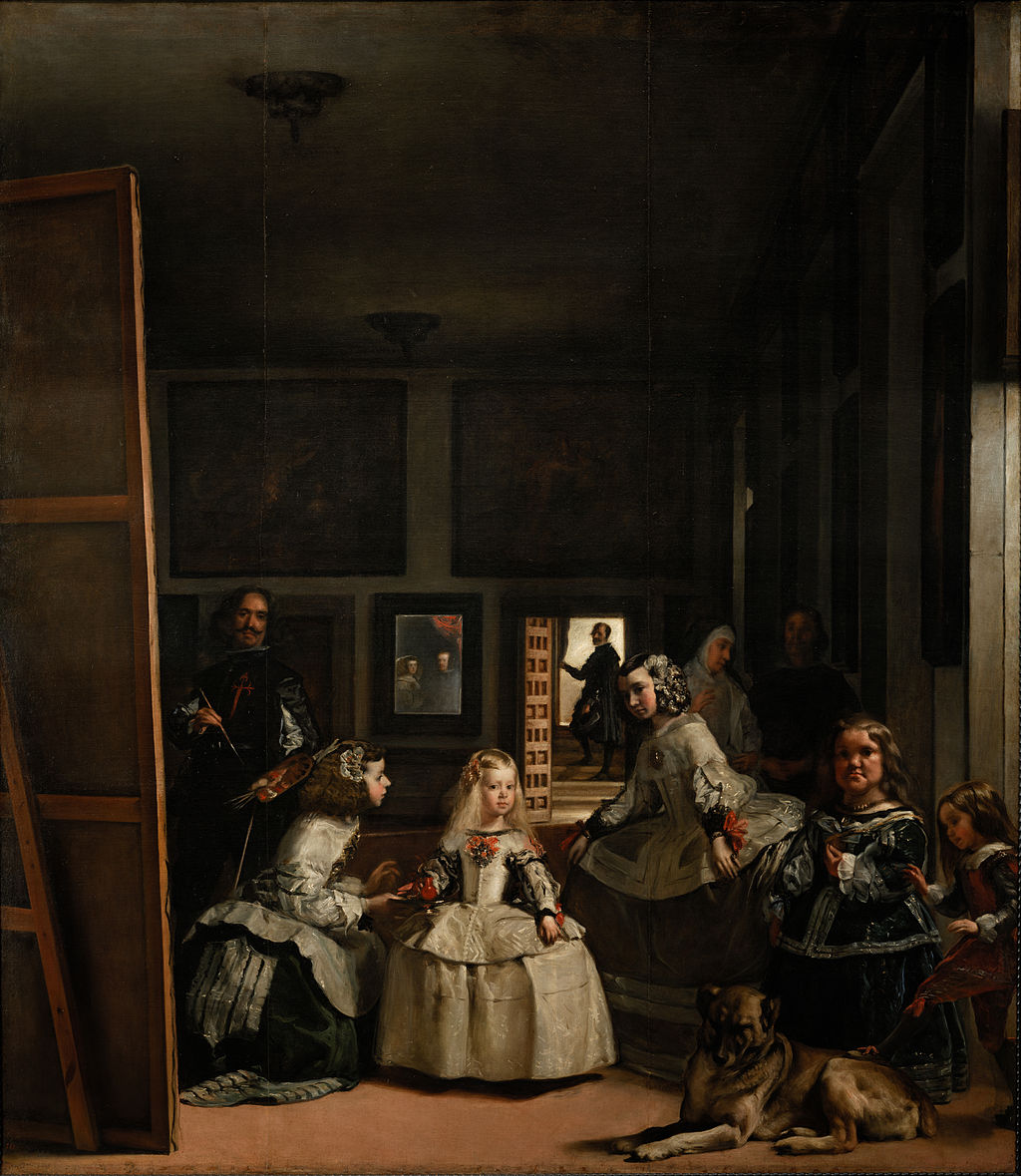 It is a universe on a canvas, a vertiginous and dizzying display of artistic bravura that leaves many questions hanging in the courtly air it evokes, its enigmas perplexing generations of viewers.

Its enormous scale helps defeat the boundaries between reality and fantasy, artwork and real space.

You feel almost able to step into this strange multi-layered scene, to become part of the court of King Felipe IV. Indeed, on closer inspection, you sense that you are actually standing in the place of the king and queen, who are dimly reflected in the mirror at the back of the room.

The pair are supposedly the subject of Velázquez’s metapainting being made in front of our very eyes, in a neat piece of conceptual play.

The court of Felipe was a place of strict hierarchy and monarchic power in a Golden Age of art and culture. Velázquez held a post at the centre of this world, succeeding to the role of court painter after the death of Rodrigo de Villandrando.

Velázquez had arrived in Madrid in 1622 with letters of introduction to the King’s chaplain, and when he managed to get a commission to create a royal portrait, he completed it in one day.

It was enough to have him appointed court painter. His succession was made on the basis that no other painter would ever paint the king, and that all other portraits would be withdrawn from circulation – as canny a piece of brand management as today’s marketing manipulations.

In this schema the king sat at a godly distance above the rest of society, his power an expression of divine right and superiority.

Next came courtiers, the nobility, and religious leaders, followed by the leading artisans, of which Velázquez was one, and then the working populace, placed above the lowly peasants, the disfigured, the lame, and finally animals.

Looking at the painting one can see that Velázquez has included all parts of this organising principle, from the monarchs, to children, dwarves, maids, and a dog.

However he has visually upended the courtly hierarchy: we the viewer become the monarch, he the artisan becomes the divine creator, and it is the dwarf whose eyes are cast directly to the king and queen.

This dexterous unseating comes directly from Velázquez’s readings of the humanist literature that had become so popular in his day, particularly with Cervantes’s Don Quixote published fifty years earlier.

This humanism can be traced in other works – Velázquez painted several portraits of the dwarves that populated the court at the time, treating them empathetically and capturing their wit and intelligence.

Indeed, dwarves were a fundamental part of the court, particularly so under the reign of Felipe who was said to have at least one hundred and ten dwarf retainers.

They fulfilled a very real function: they could be petted, befriended and confided in without arousing the jealousies of the rest of the courtiers who surrounded the monarch, constantly engaged in intrigue and plots to curry favour.

Velázquez painted many of these: Diego de Acedo, or El Primo, rumoured to be a ladies’ man, and the bearer of the royal seal, Sebastian de Morra.

Each portrait is a searing psychological examination of its subject, treated with the same skill, intensity and flair as those made of the royal family.

The cool, detached approach that Velázquez always took enabled him to portray the court dwarves with the same impartial formality as the highest ranking members of the royal household.

The dwarves’ deformities are revealed through their awkward, unconventional poses, just as the noblest sitters, be it Pope Innocent X, or the monarch himself, are ‘treated with liberality and affability that is unbelievable,’ wrote his master, Pacheco.

This levelling of the playing field in Velázquez’s work made him an appealing humanist figure.

Had it not been for his court standing, it is unlikely that Velázquez would have been able to escape the censorship of the Inquisition.

At the time, his painting of Venus At The Mirror, the only surviving nude painted by the artist, would not have been permitted to be displayed.

In Las Meninas it is Maria Barbola, a female dwarf, who stares out to the unseen royal couple, as direct in her gaze as the painter himself.

Questions regarding this painting still abound. Who is the figure in the doorway framed by light? Has he just arrived with news for the royal couple?

Who painted the cross on Velázquez’s chest? He was not awarded this specific honour until years after the painting had been completed.

Is the picture of the king and queen at the back of the room a mirror, or another painting?

But perhaps the most vexing question Velázquez would have meditated upon is what is the function of painting itself?

Is it to be a mirror on the world, or to reveal some essential, yet coded, truth about society?

Perhaps more than any other artist, Velázquez has inspired many generations of painters.

The Realists and Impressionists including Goya and Manet, and the giants of the 20th century, Picasso, Dalí and Bacon, have paid homage to Velasquez by recreating several of his most celebrated works.

His electrifying effect can be measured by Picasso painting his own interpretations of Velázquez fifty-eight times, in his own Cubist style, during the 1950s.

Las Meninas itself is regarded by many artists as the pinnacle of artistic powers, our greatest masterpiece.

Yet for another hundred years Velázquez’s art was scarcely known outside Spain.

Raphael Mengs wrote at that time, ‘How this painter, greater than Raphael or Titian, truer far than Rubens or Van Dyke, should have been lost from view is more than I can comprehend. I cannot find words to describe the splendour of his art.’

John Ruskin, the foremost art critic writing in the 19th century, stated: ‘Everything Velázquez does may be regarded as absolutely right.’