The Burial of the Count of Orgaz 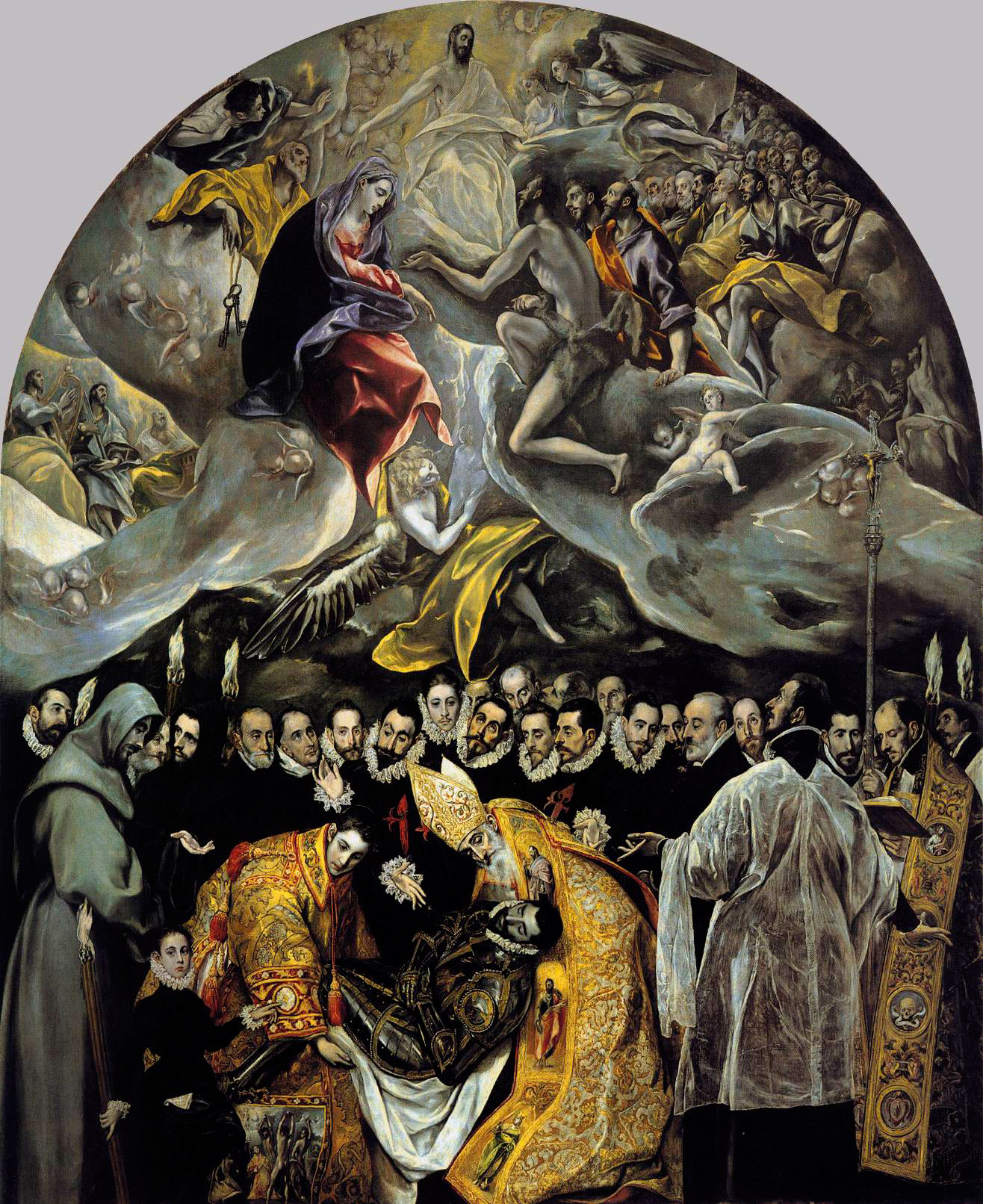 Domenikos Theotokopoulos, known as El Greco, the Greek, (1541-1614) was an outsider – a strange young man who came to Spain from his native Crete to seek advancement.

He was quickly to establish his reputation as an artist of remarkable powers, at the fulcrum of Spanish society in the court of King Phillip II.

His painterly style placed him at the centre of many romanticised accounts of his life, positioning him as a mystic, a tortured solitary genius.

Perhaps the character of the man, certainly when he was in Venice and Rome as an apprentice painter, can best be understood through one of the key moments of his life.

When asked his opinion of Michelangelo, then dead but a preeminent artist whose legacy must have weighed heavily on the shoulders of aspiring painters, El Greco replied that ‘he was a good man, but he did not know how to paint.’

He further dismissed The Last Judgement in the Sistine

Chapel, offering the Pope his services to paint over the entire fresco.

Such audacious rejection of his forebears is borne out in

His paintings are expressionistic, raw, and quite removed from the style of his day.

His greatest masterpiece was created in 1586 when he was forty-five. The Burial of the Count of Orgaz is considered by many to be one of the most astonishing religious paintings of all time.

Measuring an immense 460 cm tall, it is divided into two sections, picturing the heavens in the top half, and the burial scene below.

According to legend, the Count of Orgaz was such a pious and charitable man that St Stephen and St Augustine descended from paradise to bury him with their own hands.

The painting was commissioned for the parish church El

Still housed there, the chapel became a pilgrimage for art lovers, who today continue to marvel at its splendour.

The picture also broke ground by avoiding any references to customary Roman tropes or Venetian motifs.

This landmark work was devoid of any depiction of space, with no horizon, or sky, or perspective.

The figures massing around the burial were portraits of the nobles of Toledo at the time.

Above, in the swirling mists, Christ is the crowning point of a triangle formed by the Madonna and St John the Baptist.

The extraordinary way that the upper and lower sections are brought together compositionally has entranced viewers since the day it was painted, his figures shimmering and dancing across the painting with a dazzling glow.

Though the painting led many to consider El Greco a

Mannerist, the technique that is often referred to as Late Renaissance, in fact its influence is more reminiscent of

It was worlds apart from his contemporaries in its dramatic, expressionistic approach.

Tortured bodies, twisting limbs and extraordinary choices of colour make him a favourite of 20th-century artists, who revisited his grand canvases after El Greco’s works had spent hundreds of years in obscurity.

Picasso acknowledged the influence of El Greco on his masterpiece Les Demoiselles d’Avignon, especially the painting Opening of the Fifth Seal (1608–14) which he studied carefully.

El Greco had earlier in life moved to Venice in order to become a disciple of Titian, in whose studio he is believed to have worked.

Even at a young age, and as an apprentice, his peers recognised his formidable skills, and perhaps this early success and regard from fellow artists created a somewhat arrogant strain in the man.

Certainly by the time he had reached Rome he had begun to accrue enemies. The architect Pirro Ligorio referred to him as the ‘foolish foreigner’, and a quarrel with his leading patron Farnese ended with El Greco being asked to leave his home within the benefactor’s grand palazzo.

He probably chose to leave for Spain because his rivals had ensured he received a frosty reception amongst the glitterati of the Roman art world.

When he moved to Toledo, then a religious centre of Spain, the ancient city was the location of an important monastery, and a palace of overwhelming magnificence was under construction.

King Phillip II was in need of artists, finding that many of the celebrity painters of the day were unwilling to come to Spain, a relative backwater culturally compared to the might of High Renaissance Italy.

Having befriended various individuals connected to the royal project, El Greco received a commission to paint for the cathedral.

But despite successive assignments for the king, El Greco never achieved the status of court painter that he had envisaged for himself.

Two major works that he completed were disliked by the monarch – Phillip was set against the use of living people as models for religious scenes, and the un-godly elevation of style over content.

The painter’s self-regard and robust ego were also taken dimly; his commissions slowed down after complaints about many aspects of his process.

Rumours were spread that he suffered from astigmatism, and it was this that accounted for the strangely elongated figures in his paintings.

Many works were consigned to minor churches and municipal buildings, rather than taking their place in more stately and august locations.

Despite his career not taking him to the heights he wished, El Greco did enjoy considerable success in his lifetime, enabling him to live in a style that was certainly lavish.

He occupied a twenty-four room apartment in Toledo, and would regularly hire a band of musicians to play to him whilst he ate. He spent money freely, and enjoyed dressing extravagantly in the latest fashions.

Living in the style of a courtier stretched El Greco beyond his means as a painter, and when he died he had accrued a great many debts.

El Greco must have felt his ‘foreignness’ throughout his life, and always being known as ‘the Greek’ must have constantly amplified his sense of being an outsider.

However he remained loyal to his origins throughout his life, insisting on signing his paintings with his full Greek name, in Greek letters.

By most accounts, he never learnt Spanish, beyond a few phrases.

Yet today, alongside Goya and Velázquez, he is claimed by Spain as one of its very greatest masters.