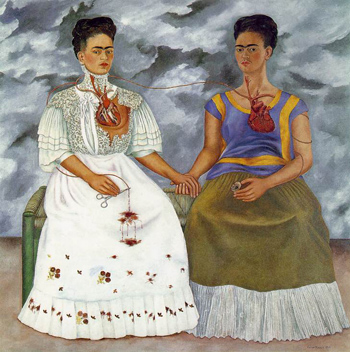 It is little wonder that Hollywood turned its lenses onto the turbulent melodrama of Frida Kahlo’s life.

Had she been the invention of a screenwriter, a film studio would have considered it too overwrought a tale for the audience to suspend disbelief.

But as she herself once explained: ‘They thought I was a

Surrealist, but I wasn’t. I never painted dreams. I painted my own reality.’

The Two Fridas was completed shortly after her divorce from the acclaimed Mexican muralist Diego Rivera. He passionately encouraged her to paint autobiographically, with works inspired by events in her life.

Diego was convinced that ‘she is the first woman in the history of art to treat, with absolute and uncompromising honesty, one might even say with impassive cruelty, those general and specific themes which exclusively affect women.’

In the double self-portrait she depicts herself with two entirely different personalities – but even with two of her, her own loneliness is still reflected.

Frida on the right-hand side is sitting in a traditional

She sits holding a small, framed picture of Diego as a young boy. Diego, the now ex-husband, appears to be absent, as if a childhood memory.

Her heart is exposed but appears intact and healthy.

It was not unusual for Frida to adopt a maternal role towards Diego and in other paintings she suggested that women in general like to mother their men, and ‘amongst them, I always want most of all, to hold a man in my arms like a new born baby.’

However, she questions this idea of possession in her diary:

‘Why do I call him My Diego? He never was nor ever will he be mine. He belongs to himself.’

Frida’s life ( 1907-1954) and her art had been shadowed by an accident that occurred in 1925, when a bus she was riding crashed into a tram. Passengers on both were killed and others suffered horrific injuries; an iron rod pierced through Kahlo’s stomach and uterus.

It took her many weeks in hospital and months in a cast to walk again, and for the rest of her life she would suffer relapses.

It also resulted in her being unable to have children with

Diego after being burdened with three miscarriages. Anatomy became a key theme in her painting, redolent of her trauma and ill health.

The Frida on the left-hand side is dressed in a colonial-style wedding dress. The white purity of the dress is stained with blood. Her dress is ripped and a slight undulation of her breast is exposed only to reveal her broken heart. A severed artery bleeds onto her lap. Her death seems imminent and is brought to the forefront of the painting.

The large flowing skirt depicted in this painting, ornately decorated with floral patterns is symbolic of her Mexican origins.

Underneath the skirt lies another secret. At the age of six the artist contracted polio and the disease stunted the growth in her right leg. Frida used these skirts to hide her bodily defect.

In an impassioned letter sent to Rivera, she wrote: ‘Only one mountain can know the core of another mountain.’ It demonstrated her belief that only they could understand each other intimately, and that unlike most couples, they were both equally strong and powerful.

When the couple were first together Diego was forty-two,

Kahlo’s mother described their union as ‘…the marriage between an elephant and a dove’ and did not appear at the wedding ceremony because of her disapproval. Her father was the only person to attend the wedding.

Although Frida later attempted to improve their relationship, her mother considered her too rebellious, too strong willed, too unlady like. She called her ‘El Jefe’ (The Boss) and would remain detached from her throughout her life.

In 1933 the couple had a house designed consisting of two separate concrete blocks united by a narrow bridge, which connected the two rooftops. The red block represented Diego and the blue Frida.

Although passionate lovers, their relationship was far from smooth; they both had several affairs and infidelity was the cause of suffering and pain for each of them.

Frida was bisexual and is known to have slept with Leon

Trotsky and Josephine Baker, a prominent French dancer, singer and actress. Although Diego appeared unscathed by

Frida’s relationships with women, he became fiercely jealous of other men.

In later years Frida became estranged from Rivera and they divorced in 1939, only to remarry a year later in 1940.

Sadly, their second marriage was no happier than the first.

Frida was devastated after she discovered the truth about

Diego’s affair with Cristina, her younger sister. She could not draw or paint for a year.

When she finally began painting again, her first work was entitled A Few Little Pricks.

It depicted a newspaper report of a woman violently stabbed to death twenty times by her husband in the middle of the night. Apparently he had suspected that she had cheated on him, and in a frenzied act of jealousy he killed her.

Frida painted about two hundred paintings, half of which are self-portraits. After her divorce from Diego nearly all of her paintings depicted herself – alone.

Through all of her adversity she was formidable and resilient; bedridden for a large part of her life, she regularly painted in a corset, whilst lying on her back.

She would paint herself from a mirror attached to the canopy of her bed. ‘I paint myself because I am so often alone and because I am the subject I know best.’

She even had a skeleton attached to the canopy of her bed to remind her of her own mortality.

Although today she is recognised as one of the world’s greatest ever painters, in her lifetime Frida Kahlo only ever had one show in the United States. It took place in a gallery specialising in Surrealism, and more than half of her art remained unsold.

The Two Fridas was bought in 1947 by the National

Kahlo received 4,000 Pesos for the picture and 36 Pesos for the frame, the equivalent of $1,000. This was the largest sum she would ever earn from one of her paintings.